What is an NDB or Non-Directional Beacon?

An NDB or Non-Directional Beacon is a ground-based, low frequency radio transmitter used as an instrument approach for airports and offshore platforms. 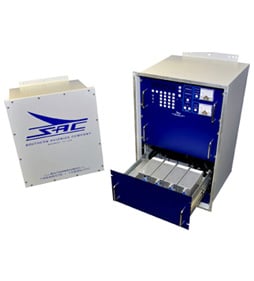 The NDB transmits an omni-directional signal that is received by the ADF or Automatic Direction Finder, a standard instrument onboard aircraft.  The pilot uses the ADF to determine the direction to the NDB relative to the aircraft.  To navigate using the ADF, the pilot enters the frequency of the NDB and the compass card (or arrow) on the ADF will indicate the heading to the station.  The signal is transmitted on an uninterrupted 24/7 basis.  An audible Morse Code call sign of one or more letters or numbers is used to identify the NDB being received.

NDB’s used for aviation are standardized by ICAO, the International Civil Aviation Organization, Annex 10 which specifies that NDB be operated on a frequency between 190 to 1800 kHz.  In North America, the frequency range is typically from 190 to 625 kHz, for offshore operations in the North Sea 500 to 1250  kHz and for offshore Brazil, 1500 to 1800 kHz is used.

The main components of an NDB ground station are the Beacon transmitter, Antenna Tuning Unit and Antenna.

Typically NDBs have output power from 25 to 125 watts for reception up to approx. 100 NM. Higher power systems from 500 to 1000 Watts are used for longer range applications.  Range depends on a number of factors such as output power, antenna, ground conductivity, frequency, site conditions, latitude, and the condition of the ADF receiver.

NDBs are highly reliable, typically provide decades of uninterrupted service, and are extremely low cost to install and operate.  Because of this, NDBs are the most widely used navaid in the world.

In addition to serving as stand-alone primary instrument approaches at airports, NDBs are also used as Locator Outer Markers (LOM) for Instrument landing Systems (ILS).  Outer Markers designate the starting area of an ILs approach or flight path to follow for a standard terminal arrival or STAR procedure.

Offshore NDBs were first introduced in the early 1960’s during early years of petroleum exploration in the Gulf of Mexico.  Since that time, NDBs have become standard equipment on offshore platforms and drill ships to provide highly reliable navigation for helicopter pilots and ADF-equipped crew boats as they support crews on drilling and production platforms.

NDBs: Why You Should Invest in SAC's Products (Part 1)

NDBs: Why You Should Invest in SAC's Products (Part 2)

Welcome back to Part 2 of this blog on why you should invest in SAC's NDBs and related equipment.