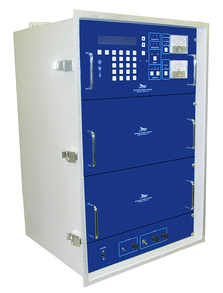 Airline Training Center Arizona (ATCA) is a pilot training facility based in Goodyear, Arizona that proudly trains students from all over the globe. With a collegiate approach to the training of pilots, ATCA operates out of a private, ILS-equipped airport where they have maintained a Southern Avionics Company non-directional beacon (NDB) since 1992.

ATCA's non-directional beacon is used as part of their training program to augment student pilots education and training. During a break-in their old NDB was vandalized and needed to be repaired.

Interestingly, the previous SAC NDB had to be replaced from the previous NDB having been vandalized during a break-in.

The folks at ATCA also mentioned an excellent reference resource: AEA.net (Aircraft Electronics Association).  This article discusses the AEA/NextGen Partnership for federal loan guarantees found in Section 221 of the Federal Aviation Administration Reauthorization Act of 2012, for the retrofitting of privately-owned GA aircraft ("also protect(ing) the FAA's own $40 billion investment in NextGen infrastructure, for which aircraft equipage is essential.")