Why non-directional beacons are used on offshore platforms

NDBs are ground-based Low-Frequency radio Transmitters used in conjunction with a helicopter’s onboard Automatic Direction Finder (ADF) to allow dependable and constantly available navigation heading information to vessels and platforms.
In 1962, the founder of Southern Avionics, John B. Goodhue, is credited with adapting an existing land-based NDB system for use on marine and offshore platform applications.

He owned and operated an FAA-approved Avionics & Power plant repair shop and had been approached by a Petroleum Helicopters pilot who said there was a big need for navigation to and from the rigs that were starting to be installed in the Gulf of Mexico.  He and some engineers came up with a solution that is still in use today.

NDBs have continued to provide a fundamental and reliable means of aircraft navigation used in conjunction with or as a backup for GNSS and other navigation systems.
Yes, all offshore platforms as far as we know use NDBs. Southern Avionics Non-Directional Beacons have been used for decades as instrument approaches and compass locators on offshore platforms to provide a means of reliable navigation for helicopter operations.
With a typical range of 100 NM, the SAC NDB provides heading indication to allow the pilot to arrive at his location in darkness or inclement weather.

The majority of platforms in operation use SAC NDB’s in 24/7 unattended operation. SAC is the industry standard to fill vital services such as routine transfer of personnel to and from shore, as well as function as locators to expedite arrival of Med-Evac helicopters in case of medical emergency

Thanks to our friends at HeliSimmer.com for the cool video below that shows how to use an NDB to find an offshore oil platform.

Non-Directional Beacons (NDB) are RF transmitters that are used for fundamental navigation of aircraft, both in offshore installations and on land. An NDB resides at a known location and is used as an aviation or marine navigational aid.
An NDB transmitted signal does not include inherent directional information.
Other navigational aids such as low-frequency radio range, VHF omnidirectional range (VOR), and TACAN do provide specific directional information in the transmitted signals.
Because NDB signals follow the curvature of the Earth they can be received at much greater distances and at lower altitudes, a major advantage over VOR.
On the downside, at long range, NDB signals are also affected more by atmospheric conditions, mountainous terrain, coastal refraction, and electrical storms.
To learn more please see this article - What is an NDB or Non-Directional Beacon?

Are they still being used?

NDBs are still widely used as instrument approaches or locator beacons on land and offshore applications at facilities around the world.

NDBs in the US vs International

In the US, the FAA has determined that GPS will be used as virtually a sole source for all aircraft navigation. Many ground-based navigational aids will be de-commissioned by 2030. This includes ILS, VOR, DME, and NDB.

Please read this article for more details - Why is the FAA Decommissioning NDBs?

NDBs continue to be the most economical form of navigation aid.  While every aircraft is being advanced with the latest technology, manufacturers are still including an Automatic Direction Finder.

As more costly navigation aids are being dismantled the NDB still proves to be a cost-effective method of navigation whether for triangulation or simply serving as a marker beacon.  Many countries are seeing as they move to GPS approaches they still need a reliable yet cost-effective standby navigation aid, and that aid is proving to be the NDB.

What is an NDB or Non-Directional Beacon?

An NDB or Non-Directional Beacon is a ground-based, low frequency radio transmitter... 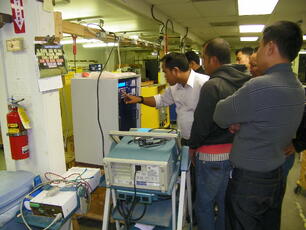 NDB System Training with our Visitors from Indonesia

Over the Thanksgiving holidays, we had 13 visitors from Indonesia visit our headquarters here in...